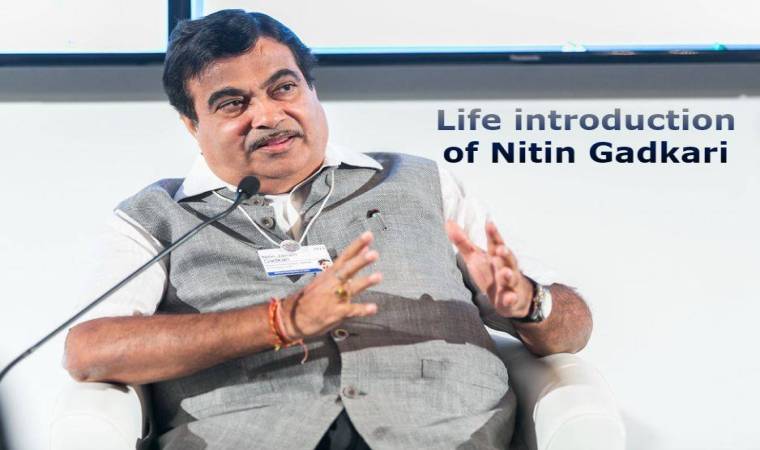 Nitin Gadkari ji is a well-known personality of our country who is related to Indian politics. Presently he is the Minister of Road Transport in the Union Cabinet of India. However, after the sudden death of former Union Minister Gopinath Munde, Gadkari got to take charge of the ministries of Rural Development, Panchayati Raj and Drinking Water and Sanitation. He is known as the ‘Flyover Man’ because he constructed roads, expressways, and flyovers. Nitin Gadkari has achieved this position through his work. In this article, you will get all the information that Nitin Gadkari ji has achieved by doing important work in his life.

Birth and introduction of Nitin Gadkari

Nitin Gadkari was born in a Marathi Brahmin family in Nagpur city of Maharashtra. He spent his early life in poverty, and he experienced a lot of struggle to earn money to support his family and his education. Even though his economic condition was not good initially, he became the founder and President of Poly Sack Industrial Society Limited.

This company is a rigid PVC pipe manufacturing company. Apart from this, his elder son Nikhil Gadkari is the owner of Nikhil Furniture and Appliances Private Limited, with which Gadkari ji is associated as Promoter Director. This company is a company manufacturing epoxy powder-coated steel furniture. Apart from this, in the name of his daughter Ketki, he has also started a company to export fruits to different countries. Whose name is Ketki Overseas Trading Company?

Nitin Gadkari entered in politics at a very young age. When he was a student, i.e., in his teens, around 1976, Gadkari worked for the Bharatiya Janata Yuva Morcha and the Akhil Bharatiya Vidyarthi Parishad, the student union. Talking about Nitin Gadkari career, he is a lawyer and industrialist by profession. But he decided to pursue his political career as a politician by joining politics. Although he takes politics as a social service, he always starts many projects for the society, Dalits, and the poor.

When Nitin Gadkari was only 24 years old, he was elected the President of Bharatiya Janata Yuva Morcha. After this, he worked as a secretary in Nagpur city. At that time, he had done significant work in strengthening the organization. He has been a member of the Maharashtra Legislative Council since 1989. From 1995 to 1999, he became the PWD minister in the Government of Maharashtra. After this, Gadkari ji joined the Maharashtra Legislative Council. He worked to spread the popularity of his party across the state. He sat on this post after winning 4 times in 1996, 2002, 2006, and 2008. Then in 2004, BJP elected him as the state-level President. After this, in December 2009, he became the President of the BJP, leaving Rajnath Singh behind. When he became the National President of the BJP, he was the youngest to be elected to this post. However, in the year 2013, he withdrew from his post.

After this, in the general elections held in 2014, Gadkari ji contested for the Nagpur seat, and this election proved very good for him because he won it. After this, included Nitin Gadkari in the list of Modi ji’s cabinet ministers, and he was selected as the Road Transport Minister. In September 2017, Gadkari was given other portfolios like Shipping and Water Resources, River Development, and Ganga Rejuvenation. He has done all his work very well.

Nitin Gadkari does work and achievements

Nitin Gadkari is known among his colleagues as a successful entrepreneur and a progressive leader who believes in environmental protection and social and economic development. Some of his notable works and achievements are as follows.

Toyota Mirai first hydro fuel car, launched by Union Minister Nitin Gadkari on 16 March, is India’s first Fuel Cell Electric Vehicle (FCEV). According to the carmaker, Mirai can travel up to 600 km on a full tank. The car, a pilot project, is seen as a step towards promoting green hydrogen.

In this way, Nitin Gadkari has spent almost 40 years in politics till now, and during this tenure, he has done many important works, due to which he has emerged as a well-known politician among the people.